Start a Wiki
The ZEH-N-131 Alsiel is a Valiancer in the Buddy Complex anime. It is piloted by Alfried Gallant.

A commander-type Valiancer based on the ZEH-N-121 Nebiros, the Alsiel was designed to use a Nector Cannon meant for airships. Because of this, it was equipped with bulky, heat resistant armor. It has a larger backpack and higher output compared to previous models, granting it improved mobility and maneuverability.[1]

Before the final battle at the Space Garapushka, its Nector Rifle was upgraded to a more compact model, capable of rapid fire.[2]

The Alsiel is equipped with a Nector Rifle, and the first Valiancer to do so. In two different instances, one shot was able to take out quarters of the Cygnus and destroy Lee Conrad's Beryl Commander in a single shot. It has been stated it is abnormal for a Valiancer to be able to carry a Nector Rifle on the front lines.[3] Its appearance is that of a large, bulky long rifle that fits with the design of the Valiancer.

The Alsiel has a shield that blocks incoming projectiles. However, there is a special mechanism in this shield, this being that a sword for close quarters combat is hidden inside the shield. The sword is red in color, while the shield is the standard red and black styled shield of Zogilian Valiancers. 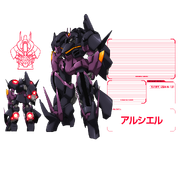 Alsiel with an upgraded Nector Rifle in Buddy Complex Final Chapter.
Add a photo to this gallery

Retrieved from "https://buddy-complex.fandom.com/wiki/ZEH-N-131_Alsiel?oldid=9177"
Community content is available under CC-BY-SA unless otherwise noted.